Living with the Death Strip

Currently on display at 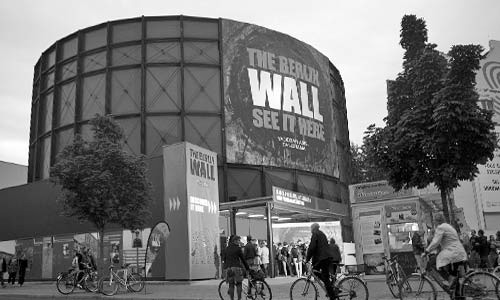 Living with the Death Strip

Yadegar Asisi wanted to reflect on the atmosphere and day-to-day life of 1980s Berlin in the shadows of the Berlin Wall, where the division had become a normal and accepted part of being in the city. In THE WALL, Asisi, who himself grew up in the GDR and lived in West Berlin after 1978, consolidates his everyday experiences in divided Berlin into a snapshot of the mood, which is then projected on a large scale.

The Panorama transports visitors to an autumn day in the Kreuzberg area of Berlin. The 1980s alternative scene is booming, where punks, squats, trailers and a petting zoo meet on the streets of SO 36, completely separate from life in Mitte and East Berlin – despite being just a stone’s throw away. The several-metre-wide death strip and its border fences separate east and west, FRG and GDR, capitalism and communism.

THE WALL highlights the daily routines of the divided city in numerous interweaving scenes and settings over a period of some 25 years. The accompanying music, which was composed by Eric Babak and features original quotes from politicians from the east and west, adds an auditory element to the experience – paired with diffuse lighting, lending a sense of seriousness and menace to the contemplative scenery.

More than a hundred photo motifs from the time of the Berlin Wall and of the day of the fall of the wall in 1989 serve as an introduction to the project in the first exhibition room.