Myth of the Royal City of Saxony

Presumably 2021 on show at the 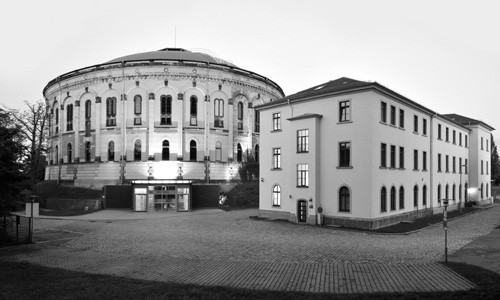 Panorama and exhibition are open. Find current information and tips for your visit at
panometer-dresden.de

Myth of the Royal City of Saxony

The Panorama depicts the period of the Polish-Saxon Union in Dresden from 1697 – 1763. Under Augustus II the Strong and his son, the Dresden Court (‘Dresdner Hof’) became the centre of an unprecedented world of luxury and artistic innovation in Saxony. Visitors can look out from the tower of the Dresden Cathedral across plazas and narrow streets to the Dresden Castle and Zwinger palace, over churches and manors to the Neustadt. Situated in a valley along the Elbe, the cityscape neighboured by Meissen to the north and Pillnitz to the south has often been compared to Florence, lending it the name the ‘Florence of the Elbe’.

The exhibition is based on drawings of Dresden by Bernardo Bellotto (also known as Canaletto) dating from the middle of the 18th century. The Panorama unveils an image of the city distinguished by Renaissance and Baroque architecture, where except for a few large structures, many buildings around 1750 continued to be influenced by the Renaissance, a trend that only changed after the destruction during the Siege of Dresden in 1763.

The scenery illustrates the pulsing spirit of the era. Displays of historical figures like Tsar Peter the Great, Johann Sebastian Bach and Casanova give a sense of the cultural setting of the time, while the day-to-day life of the city comes alive thanks to sedan bearers on the streets, market women at their booths and jesters on the plaza.

The accompanying exhibition features an introduction to the Baroque period. For Yadegar Asisi, the history of Dresden represents Europe as a whole; the dynamic connections and cultural and economic relationships that criss-cross through the continent.

An accompanying book about Dresden’s history and the two panoramas – BAROQUE DRESDEN and DRESDEN 1945. The illustrated essays, articles and interviews delve into Yadegar Asisi’s concept.