THE CATHEDRAL OF MONET

The Hope of Modernity

THE CATHEDRAL OF MONET 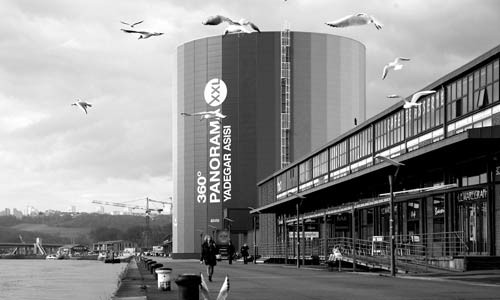 PANORAMA XXL
Since 2015 in Rouen

You will find updated information at
www.panoramaxxl.com

The Hope of Modernity

In this project, Yadegar Asisi’s focus is on Impressionist painting. The inspiration behind the panorama is Claude Monet’s Rouen Cathedral series, which was painted between 1892 and 1894 in Rouen and Giverny in Normandy. 28 works by Monet depict the west façade of the Gothic building in different lighting and colour palettes, and are regarded as a prime example of Impressionist painting.

Yadegar Asisi’s panorama is his tribute to the dawn of time, and to Impressionist painting and Claude Monet in particular. He took Monet’s panel paintings of Rouen Cathedral as a basis for developing a circular painting that shows the west façade of the cathedral and its surrounding buildings at the end of the 19th century. And the extraordinary thing about it: Asisi produced his cylindrical painting in an Impressionist style, from which the over 30-metre high panorama was then created.

The scenery opens up as if one were standing on the cathedral square of Rouen in 1894. You can see the mighty west façade of the cathedral and the bourgeois houses surrounding it during the Belle Époque period, some of whose half-timbered architecture dates back to the late Middle Ages. There is a lot of activity on the square and you will find famous contemporaries of the period who originated from or were inspired by Claude Monet’s artistic environment.